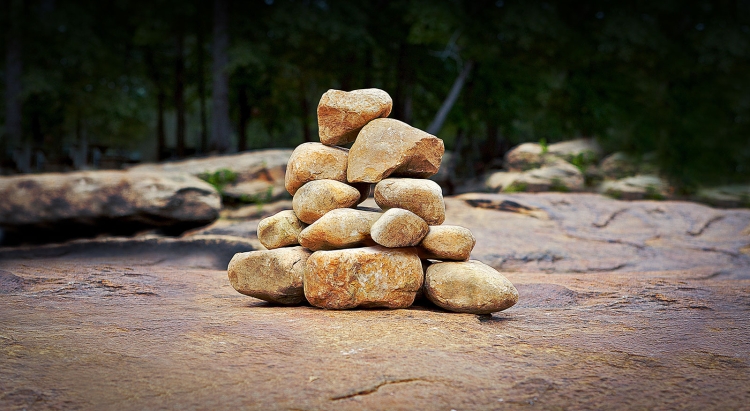 A couple of posts ago, we talked about the children of Israel in the desert…how they got really tired of having no food. They decided that they’d rather have died in Egypt with full bellies than to die out in the desert with their stomachs gnawing on their backbones.

One of the big God-stories in the Bible. Forty years they’d waited (their own fault, mind you)…and now the time is finally here. Imagine as they stepped their toes onto the dry river bed of the Jordan River, the water having been dammed up by God’s mighty, powerful hand.

They’re about to leave behind them some pretty miserable memories: their history of slavery in Egypt, the endless wandering and nomadic life in a barren wilderness, countless funerals for an entire generation of Israelites that messed up big time and wouldn’t trust God’s promises.

When they got to the edge of the river, it was at flood stage. Not the wisest decision to cross any area that’s flooding (like watching cars go through a flooded intersection thinking they can make it…and they don’t). The river’s speed was menacing and dangerous. To human eyes, this was an impossible, impassable river.

But if you know the story, you know that God pulled another big miracle moment, just as he always does. Similar to the miracle of crossing the Red Sea, God rolled back the waters. God showed up with all of his holy power and made a way where there seemed to be no way, displaying his fierce majesty by making a sandbox through a stream.

Have you ever unlocked the door to your new house? I can remember when I was a preteen and my mom and dad bought a brand new house on a brand new street in a brand new subdivision in a brand new zip code. We went periodically during the building process to see how things were coming along. I remember early on, standing on the concrete foundation with no walls yet. I couldn’t make heads or tails out of it. My parents would point out, “This is where the living room will be, this is the kitchen, this is your room” etc.

We envisioned it, planned for it, imagined how we’d decorate it. So many exciting possibilities ahead. But when the day came to unlock the front door and step into the house, the emotions came in a flood. The excitement was worth all of the time, trouble and waiting that we had to go through to finally and permanently move in.

Now imagine the children of Israel finally standing in Canaan; finally they are home. Finally they have a place. Finally they are experiencing being the fulfillment of God’s ancient promise to Abraham. Can you imagine how overwhelming that must have been? I can see them hoopin’ and hollerin’ and shoutin’ praises to God in worship!

But there’s a key element of worship that I want us to focus on today.

When all of the people had crossed through the river to the other side, God gave Joshua some very specific instructions. In Joshua 4:2-3, he said, “Now choose twelve men, one from each tribe. Tell them, ‘Take twelve stones from the very place where the priests are standing in the middle of the Jordan. Carry them out and pile them up at the place where you will camp tonight.’”

So twelve burly men (they must have been burly) hoisted heavy stones to their shoulders from Jordan’s river bed and then placed them in a pile in the Promised Land, just as God instructed. This is what the Bible calls an “altar.”

I can remember a few summer youth camps in Palacios, Texas, as a teenager. On the last evening of camp, we were often instructed to go out and pick up rocks to build our own “memorial” to what God had done in our lives that week. (Mind you, this was a difficult task, as Palacios sits right on the Gulf coast and there were a whole lot more shell than there were rocks…we had to compromise a tad.)

Altars are a physical symbol of a spiritual desire to “consecrate” or dedicate yourself fully to God. They are memorials built to recall an encounter with God that had a profound impact on someone. They are an unmistakable marker at the very place where God demonstrated his power to overcome anything.

There are many examples of altars throughout the Bible.

In Genesis 8:20, Noah’s first act after leaving the ark was to build an altar to God and worship him through sacrifice. His motivation was gratitude of the Father’s goodness, provision and protection.

In Genesis 12:7, Abram obediently left his home, took his wife and his nephew and all that they possessed, and headed to Canaan… just like God told him to do. Once he arrived, God reminded him of his promise…that the land where he now stood belonged to Abram and his descendants. So Abe built an altar to honor God; a place where he would meet with, offer sacrifices to, submit to and worship him.

In the book of Judges (6:24), after an “angel of the Lord” met Gideon in his personal hiding place and charged him with leading God’s army into battle (and after Gideon picked his jaw up off the threshing floor,) he built an altar to God. He had just encountered him face-to-face…and he was no longer afraid. He even named the altar “The-LORD-Is-Peace”…because he is!

We are [prayerfully] reaching the beginning of the end of this “pandemic.” Before too long, we will be acclimating and adjusting to whatever life holds from here on out. We don’t exactly know what that looks like. I will tell you this, though: life will never be normal again. Make of that what you will. I have my ideas; that’s not for today’s post.

But as we gear up and get ready for whatever the future holds, why don’t we make a declaration? Why don’t we build an altar? Like literally, legit build an altar…a memorial, if you like that name better.

• It’s a personal reminder of how awesome God truly is.

When the people of Israel saw that pile of rocks near the river, it reminded them, without a doubt, that they didn’t do this alone. The rocks were shouting, “God did this, y’all! He’s the one who made a way through that flooded river. You accomplished this because of HIS power, not your own!”

When you make it through to the other side of this pandemic/quarantine/plague, or whatever your name for it is, you need to realize that God did this, y’all! God made a way, and is still making a way, through this flooded river we’re in the middle of.

For the people of Israel (and for us), the pile of rocks served as a reminder to everyone that God is all and almighty. It wasn’t a memorial to the strength and perseverance and fortitude of the people: it was to honor God, and God alone.

• It’s a great way to tell others how awesome God is.

Guess what? There are a lot of people who couldn’t be less interested in what God or the Bible says, especially in regards to this current wilderness situation…and they don’t care about what God did for the children of Israel crossing the Jordan, either.

But some of those people are very interested in what you have experienced; about what God has done for you specifically. It would be pretty easy for them to argue with a Bible story or some specific scripture verse, but they just can’t argue with what’s happened to you…your personal story.

“What is it that makes you different?”
“Why do you go to church every Sunday?”
“Why is it that you don’t worry about the future?”
“Why did you pile up a bunch of rocks?”

Be ready to answer them.

• It’s a great way to tell future generations about how awesome God is.

Closer to home, though, it is a reminder to our families, and especially our children. Since rocks don’t naturally just pile themselves up, there was going to come a day when the little ones of God’s people would ask their parents or grandparents to explain them. And God tells those adults exactly what to do.

“…tell them, ‘They remind us that the Jordan River stopped flowing when the Ark of the Lord’s Covenant went across.’ These stones will stand as a memorial among the people of Israel forever.” (Joshua 4:7)

The rock pile altar had a very important purpose: for the people to teach their children about the great things God had done. God wanted this great moment in His-Story to not be forgotten among the generations.

Do you remember the great things God has done for you? Are you telling your children how real God is, how good He is, how He is interested and working in their lives? Keep their faith from growing weak with constant reminders of how God is always busy on our behalf.

Be amazed and forever grateful to God in front of your children/grandchildren. Remember and speak out loud about all the times God has shown up…yes even during this difficult season. Tell the story; pass it down to the next generation. Children will only remember our heritage if we teach it to them.

Here is my challenge to you. Whether you live alone, with only your spouse, or with children or parents…I challenge you to take your family and go out and pick up rocks. Try to find bigger rocks if you can. Gather enough to make a decent pile.

Pick a spot outside near your home…somewhere they can be seen regularly…and put the “altar” together. Doesn’t have to be fancy or pretty. It doesn’t have to be any particular shape. That’s not the point. The point is, make it where it can be seen. Paint the rocks if you want to…with strong words like faith, hope, love…words of remembrance.

In the story of Joshua and the children of Israel, notice that Joshua had the men gather the stones from the Jordan River…right in the middle of where the miracle happened. Right where God entered into their physical circumstances and changed things.

Since we are all “safe at home,” and that is where we’ve spent the large majority of our time together there, it’s fitting to build your memorial near your home. The stones in today’s story were placed where the people lived. They were set where the people and the next generation would continue to gather.

As you build your memorial/altar with the gathered “stones of remembrance”:

• Talk to each other about the things God has done for you, your family, your church and your community during this season of uncertainty.

• Talk about how this physical representation will continue to remind you of those good things.

• Talk about the faith you have that God will continue to guide and provide in the future, because He is always faithful.

The simple, plainness of the rocks doesn’t matter…the story attached to them is what makes them a treasure. They represent some important things.

A decision.
A dedication.
A declaration.

Something that you not only want to remember…but you need to remember.